Karen: My name is Karen Holmes and I’ve had migraines for over 40 years. They started when I was 12 and I had it occasionally, but then they came as a transformed migraine. I started getting a daily chronic headache and then they transformed in the transform migraine. I had almost every day I had some sort of headache pain.

I tried the trial procedure-it worked for me and then I had the permanent procedure a year ago and my life was transformed. The seminar was really my first take on what was going to happen and that seminar answered a lot of questions. Really after that seminar I was pretty sure this was going to be the procedure for me.

Dr. Reed was able to answer you know if you’d had tried a lot of medications before-had you tried chiropractic massage, nerve blocks. It didn’t matter if you were older or younger, if you’d had them a lot-if you are a severe case-really this was going to be for somebody-not if you just had them occasionally but if you’d had-somebody that had frequent and they weren’t responding to the typical medication-the preventative and abortive medication-this was something alternative. Something that you could return to and then after I heard a patient testimonial I thought wow I think my next step was to do the trial procedure-which sounded very exciting to me so before we could do the permanent I could actually try it out and that convinced me-that really alleviated any concern I had so we could do a trial procedure.

I was so excited I just couldn’t wait to get my appointment and I was able to get an appointment with Dr. Reed quickly and the only thing we had to wait for was to get insurance approval for the trial and Dr. Reed’s office was so helpful with that. Any stumbling block we had the insurance specialist was always routing for us and going to bat for us and then we got the approval for that and then I had my trial procedure in 2010. It worked right away and I tried to get-I mean I really didn’t have to try hard to get a migraine because I had them frequently but I went out and purposely ate Chinese food with MSG-are the triggers that I had-I had quite a few so it was easy and it worked and I couldn’t believe it.

I just was realizing I don’t have a migraine. This is awesome so that weekend was awesome. I was a very severe case-that’s what my previous neurologist had said because I had tried all sorts of medications. I tried preventative, abortive, nerve blocks, massage-chiropractic, Bio-feedback-you name it-I think I’ve tried it-if it’d been out.

I spent many, many days in a dark room with a washcloth on my head laying on a bag of ice with a trash can nearby in case I had to-you know if I was going to get sick because of the nausea and basically I had to quit work in 1995 because my migraines were so bad due to a lot of illness-absence due to illness and that crushed me because I was a good employee but I couldn’t be there because I was so sick. Now I have my life back and I’m well enough to work but I just choose now to really to be a volunteer at church and we don’t have to cancel plans socially, we’re able to travel.

I’m able to exercise, I’m able to work out-I just couldn’t do those things before. Activity was so tough-you know the movement of the head and I just hated to cancel things. My friends tried to be patient but they would get frustrated sometimes if we’d planned things and I couldn’t show up and my husband just thinks it’s been like a 180 for me.

It’s an invisible disability and those that haven’t had it are kind but they don’t really understand and they just want to say take two aspirin and call me in the morning. They really don’t-bless their heart-they really don’t understand and it’s very, very painful and I’m really blessed to have a doctor to specialize in it because a lot of doctors don’t want to tackle it.

It’s really been a transformation with the procedure. Everybody from the front office to the St. Jude reps to the doctor themselves-everybody couldn’t be more helpful and I tell you really want somebody in the insurance department to go to bat for you because I know when I first got a denial and sometimes I couldn’t figure out how I should approach my insurance company and they’ll help you in saying the right word or a medical code and they are so helpful-because I believe they truly want to help you. They are here-they want to help alleviate your pain and so I would say definitely.

I wouldn’t recommend anybody else but this office-Dr. Reed’s office and I know there’s other doctors out there but I would definitely say come to Dr. Reed’s office and we’ve had just the best care here. I say research it, come to a seminar-find out for yourself and find out from the trial procedure. You’ll know from that trial procedure whether it works. I was a very severe case and it’s taken care of 85% of my migraines and only occasionally do I have to use an abortive medication in tandem with my stimulator but that’s rare. It’s just amazing that a little stimulation could take away that pain-it’s awesome. 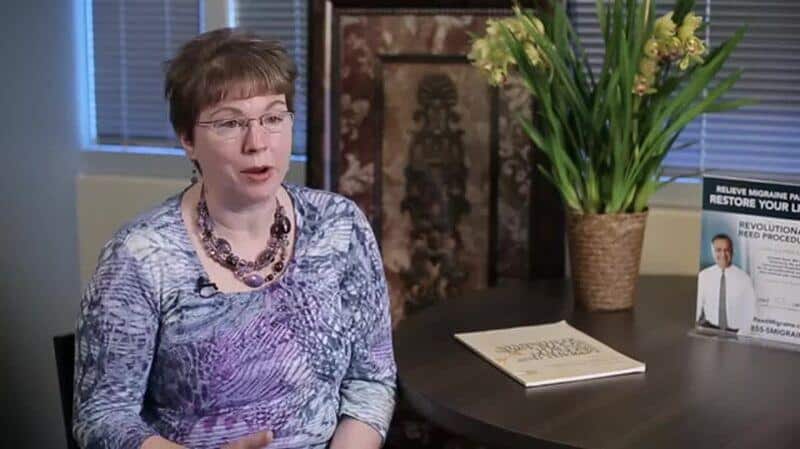