Austin: I don’t really remember when they started. I had headaches periodically
all the time. Then, one day, I just was like I don’t remember not having a headache. I’ve had headaches every hour of every day for at least eight or nine years and migraines two or three times a week on top of that

Anytime I got a really bad headache, I would lay in bed for forever, but my personality just wouldn’t let me. No matter how bad I felt, I had to just get on with my life. I would go to school with a migraine. Even if I couldn’t open my eyes or even pay attention, I would just show up. I would try to live my life as best as I could in the situation that I had, but it was just difficult for me to do that. A lot of times, physical pain actually held my head.

I enjoyed doing sports, but a lot of times, right after I finish a game or something, I couldn’t go out with a team because I was hurting so bad I just had to go home and fall asleep and get out of any place that had lights or loud noises or anything. For eight, nine years, I had a steady six every hour of everyday. Two or three times a week it would spike up to eight or nine and stay there for sometimes a couple of days, sometimes just a couple of hours. Most of the time, I would just fall asleep. Most of the time, it would be better the next morning, but a lot of times I would have to wait a couple of days for it to ever come back down, but it would never go below five and most of the time it was at six.

After I had the procedure, right after I found the … that worked best for me, it dropped straight down to a two and it’s been around at two ever since. At first, I was like I don’t know if I want something implanted in my head and down my back, because I’ve dealt with this headache for years. I wasn’t going to let it ruin my life like it took away a lot, but I didn’t want something invasive in my body making it so I can’t go to sports, because I was still playing sports. A stimulator’s not hard to use at all. I have to charge it like once every other week. It takes like five, ten minutes to charge. It’s just a bell I put around it and the sensor just goes off with the batteries on my hip. I charge it while I’m watching TV or driving or something. Then I can turn it on and off with the magnet. Just swipe it over the battery it turns it off or on, if I ever need to do that a lot of times I sleep with it off. Besides that, I usually have it on all the time. Then, if I ever want to change the frequency, which I don’t do as much now that I’ve had it for a while, it’s just a little remote that I can hold over it and it’s really easy to control.

After the final procedure, I was back coaching gymnastics. I was back doing flips off walls, jumping on the trampoline, doing flips on that, playing slam ball out in my backyard which is we lower the basketball goal to eight and a half feet, and it’s really physical. There’s no foul call, and it’s really rough game. I’ve been able to do everything since. I hadn’t had not a headache in nine years. I didn’t even remember what it felt like and it felt terrific. The stimulator just feels like someone’s massaging my head. My head hasn’t felt this great since I can remember. Dr. Reed has done a miracle. 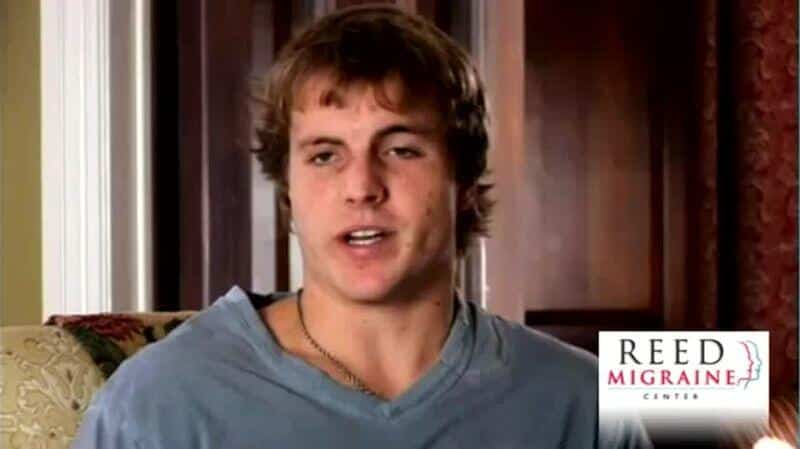