Kay: By the time I was high school, 10th grade, they were bad enough that I was going to the doctor and taking prescription meds or either missing school. We tried, I think, 67 different medication protocols, and we did Botox. We did trigger point injections. We did surgical nerve blocks. We did acupuncture. We chiropractic. The first time that I heard about Reed Migraine was from the nurse practitioner who works with my neurologist. She said, “You know, you at the end of the line. There’s another option to explore,” so we thought about that, and the we decided to get another opinion from another neurologist who said the very same thing. Then, we went to a seminar. It’s been probably about eight months since we did the trial. Then, we were cautiously optimistic. We could tell in the hospital that it made a difference, but then we went home and just tried to carry on. Then, that night at 4:00 in the morning I woke up and felt like something was very wrong and I realized it’s weird that I don’t have a headache. I woke up Kevin, “Wake up, wake up. You have to know this. My head stopped hurting. Wake up, wake up.” Then, we knew. This is it. This is really going to work. As soon as we took he trial out the headache came right back, and that was depressing. Probably the hardest part was waiting between the trial and the permanent procedure.

Kevin: Probably the main way that it affected me is just having to watch her suffer through the pain and the trouble she’s had with it, which is what’s so nice also about getting some relief from it too. A lot of days she would just try to make it through the day type of situation and was usually successful with that. The last six years especially were really hard for her, I think, and that’s hard to watch.

Kay: Ever since the minute we came to the Reed Migraine seminar everybody has been just so nice and reassuring. One of the things that we really appreciated that there wasn’t any kind of sugar coating or this a miracle cure or anything like that. Everybody was very honest, here’s what’s going to happen, and here’s how we’ll know if it works. It’s going to be up to you to decide. Everybody’s just been wonderful. We’ve had a couple of times where since the permanent procedure where things were not quite right and things needed to be re-programmed. It’s always very quick. I just send a text message to Cher and she’ll say, “I’ll meet you tomorrow and we’ll figure this out.” It’s just been a very, very easy wonderful experience. Everybody close to us who knew about the 24/7 headache was just so hopeful. In fact, I think some people were more excited and optimistic than we probably were before we had the trial because we’re hoping for just anything to work. Then, after we did the trial and it worked so well, there was this long excruciating wait for insurance approval which probably seemed longer to us than it actually was, but everybody was so, so excited for us to the point where they were saying, “We’re going to make this happen whatever your insurance says. We’re going to have a bake sale. Whatever we have to do we’re going to do.” A definite high was when we realized the trial was going to work. We could believe, yeah, this really is it. I don’t mean to seem like it’s the miracle cure and it just makes you not a migraine patient any longer, but it is absolutely life changing. Every minute of our lives has been different ever since then.

Kevin: It gives us some way to control it. It gives her some control over the migraine.

Kevin: Much better than the medical stuff.

Kay: I don’t know if this was a high or a low or maybe it’s both, but coming to realize there’s a little bit of a lag time where you don’t realize you can fix the headache, so you just lie there thinking, “Oh no, it’s going to be a really bad day. Wait, I can do something about this.” It takes your head a little bit to realize there’s something you can do instead of just figure out how to cope with it. It’s usually within in 10 minutes that it’s gone or it’s pretty close to gone. That’s, I think, both a high and a low. One thing that I would say to anybody who wanted to know about it is that if going to through the surgery and dealing with that kind of healing in some weird places doesn’t seem better than your headache, it’s maybe not the right path for you to be on. If all of that is a piece of cake compared to the headache that you’re having all the time, it is absolutely the thing to do. There is nothing in my life that is the same as it was before we did the surgery because every day, I think, it was literally every day I would say to Kevin, “If I could have five minutes without a headache I can do all my thinking for the entire day during that five minutes, and then the rest of the time I can just deal.” Then, it was, “If I could have five minutes a week without a headache I can do all my thinking then.” Now it’s all of that is gone. It’s just, I don’t even know how to describe the difference in being able to think and go through life and really be living instead of just going through the motions. It’s hard to say how my life is different because there’s just nothing at all that’s the same. We have started going to movies again because we can. There are restaurants that we had stopped going to because it’s just too loud, so lots of times we’ll say, “What’s the loudest place we can think of to go to?” We’re going to take a big trip to Europe in the spring which there’s just no way we would’ve ever done that. Now all of those things are back.
Kevin:She smiles a lot more now too. 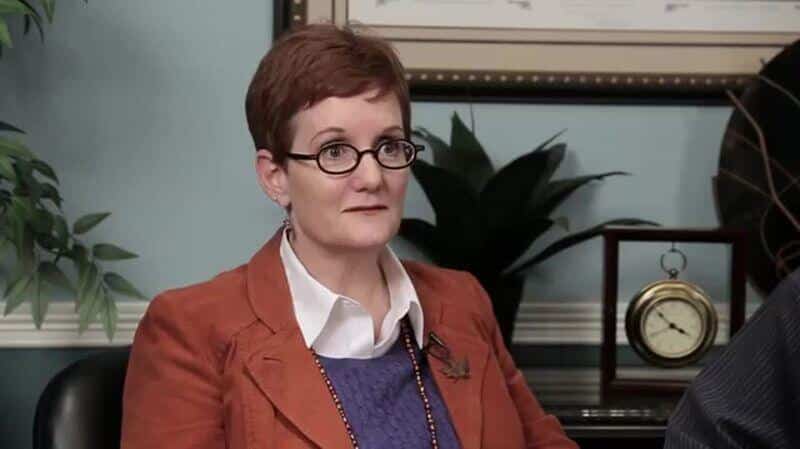